Always start your trip to Vegas by visiting www.high-roller.com

Ed Roberts, the 67 year-old from Braintree, Mass, picked up his 2nd High Roller title becoming only the 3rd player to have won both the February and July High Roller.  Roberts won previously in July, 2008. He represented the age 60 & Over division in the Championship Round and, although relieved and happy, didn’t think he would win as he took a seat after completing his 10th frame. 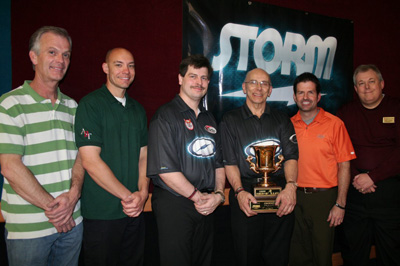 Pictured from the left is runner-up Greg Shields, 4th place Dennis Beagle, 3rd place Vernon Peterson, Champ Ed Roberts, Storm's Hank Boomershine and Sam's Town's Whit Jones. Roberts was presented with the winner's cup and $25,000 check moments after the completion of the 2011 February High Roller. It was the 112th High Roller event for the 67 year-old who bowled in the very first High Roller back in 1982!

Roberts finished first in the 10th frame, spare/strike for 208 but there were still 2 players who could pass him. Vernon Peterson, the last undefeated player in the Age 45 & Under division was no stranger to Championship Rounds, but had started his 1-gamer with 2 opens and had to play catch-up.  As he looked up in the 10th, he was just a double away from overtaking Roberts.

Also in the hunt was High Roller veteran Greg Shields, the 54 year-old from Independence, MO, and although in his first finals, is always feared on the lanes. Roberts thought he might sidestep one of those 2 players but didn’t dream that neither one would pass him, Roberts topping the Championship Round 208-203-200-171.

For Roberts, the $25,000 prize and his 2nd title.  Although scheduled for knee surgery in the coming weeks, Roberts vowed to be back for the Senior Easter Classic, bad news for the rest of the field!

From the 215 Average & Under division, Dennis Beagle, from Lehigh Acres, FL took home $10,000 in his best High Roller performance. Earlier he had fired the only 700 series in his division and now becomes the newest member of High Roller’s $10,000 Club!

Earlier in the week, Steven J. Smith picked up High Roller title #2 with his “A Game” victory and $10,000 prize. He bested Craig Auerbach and Darwin Wimer for the honors.

For complete results, visit us at www.high-roller.com and click on Headlines!

Next up is the Senior Easter Classic, hosted by Sam’s Town from April 17 to 24.  There are 3 separate Classics for players aged 50 & over and 60 & over. There is also bonus qualifying for 70 & Over!