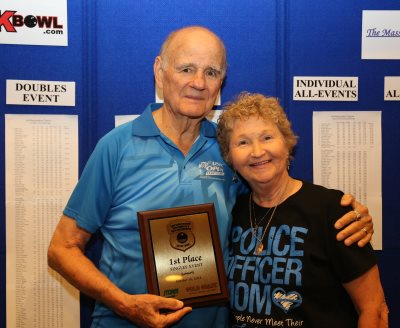 El Paso USBC Association Hall of Fame Member Benjamin (Benny) Salcines cruised to the singles title by edging out Don Quitangon by 23 pins. This 169 average bowler had games of 227 237 and 200 for 664 and with his 162 pins handicap had a 826 good enough to take home the $2000.00 first place check. Benny used Storm Products throughout the tournament. This was a very emotional experience for not only Benny but all bowlers in the 2nd Annual Law Enforcement, Fire Fighters & First Responders Tournament at the Gold Coast in Las Vegas.

They had a re-entry squad for singles and there were several bowlers that didn’t bowl it due to the fact they didn’t want to take the title away from Benny. I actually saw tears from some of the bowlers as they announced Benny’s name for winning the singles. 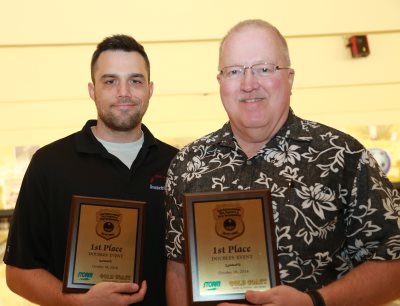 Benny and his significant other, Alta James moved from El Paso TX to Austin TX about four years ago. Benny currently bowls in two leagues at Westgate Bowling Center and recently participated in his 26th USBC Open Championships. It obvious this is something he is very proud of doing. He retired from Billy the Kid (clothing industry) in El Paso TX.

Tom is a retired Police Sergeant from Newark NJ and used a Roto Grip Hyper Cell and currently lives in Las Vegas NV; Bob is also from Las Vegas NV; Richard used the Blue Hammer, First Blood, and the Assassin and is from Las Vegas NV; and finally Sean works as a Casino Supervisor and lives in Henderson NV and he used the DV8 Endless Nightmare.
Don Quitangon won the all events title with a 2279 with handicap. He had a 571, 581, 641, for a 1793 scratch total and won $300.00. 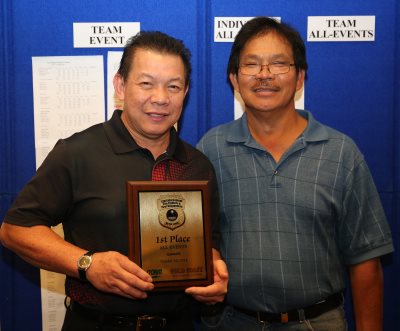 Don Quitangon and his friend

This tournament is for active & retired First Responders, Law Enforcement, Fire Fighters, men & women from agencies that serve our communities as well as their guests. Each four person team must include at least 2 that are eligible and up to 2 guests. For more information on this event please visit www.high-roller.com and let’s make this tournament an even a bigger success in 2015. This tournament was sponsored by Storm Products, Inc. and presented by the High Roller.

Photos and story by Randy Gulley.